All current QED HDMI cables are already compatible with the HDMI 2.0 standard and carry the "High Speed with Ethernet" logo and 3D/4K logos to prove it.

Since the introduction of the HDMI 1.4 spec in 2009 the HDMI.org banned the use of version numbers on HDMI cables. Therefore any cable which claims to be HDMI 1.4 or 2.0 is breaking the HDMI.org packaging code and is not entitled to use the HDMI logo. Instead the HDMI.org introduced four distinct cable specifications for which only the following official logos could be used:

Standard Speed cables were only required to pass a 720p60 or 1080i60 (2.25 Gb/s data rate) signal to receive the HDMI logo, whereas High Speed cables needed to be able to transmit a data rate of 10.2Gb/s which exceeds the current highest quality video format of 4K@24Hz (8.03Gb/s). The Ethernet version of the cables were capable of transmitting LAN signals down the HDMI link and were also fully compatible with the new Audio Return Channel feature. To avoid confusion QED decided to make all their cables "High Speed with Ethernet" so that our customers were able to enjoy any video standard or HDMI feature of which their partnering electronics was capable.

With the introduction of the HDMI 2.0 standard in September 2013 the maximum data rate of the HDMI link has been increased from 10.2Gb/s to 18Gb/s. This is to accommodate the new 4K@60Hz video standard which requires a data rate of 16.06 Gb/s. In order to achieve this, the electronics at each end must be 2.0 compliant but the cabling physical layer remains unchanged. To quote the HDMI.org website: 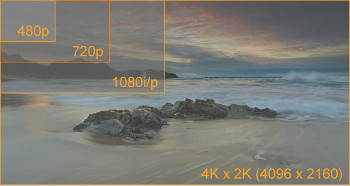 The same four cable designations remain from the 1.4 standard and the ban on use of version numbers remains in place. In order for a cable which was previously only capable of carrying 10.2 Gb/s to carry the new 18 Gb/s data rate the electronics each end have been modified so that the data clock is reduced in speed from 1/10th of the data rate in version 1.4 to 1/40th of the data rate in 2.0. Additionally in case a very inferior cable is being used there is a new error detection algorithm included so that the TV can report the fact that it is receiving too many errors to the Blu-ray or other source and request that the data rate be reduced to a lower video quality.

Note that there is error detection but not error correction; this is important because it at once admits that cable induced errors are present and that the only way to deal with them is to reduce the quality of the sending video standard.

All the more reason then, to invest in a QED Reference HDMI cable which even when tested under the old 1.4 standard was capable of 21 Gb/s at 1m - more than twice the required speed for a "High Speed with Ethernet cable".

Using a QED cable means your equipment will never have to reduce video quality to maintain a stable data link!!